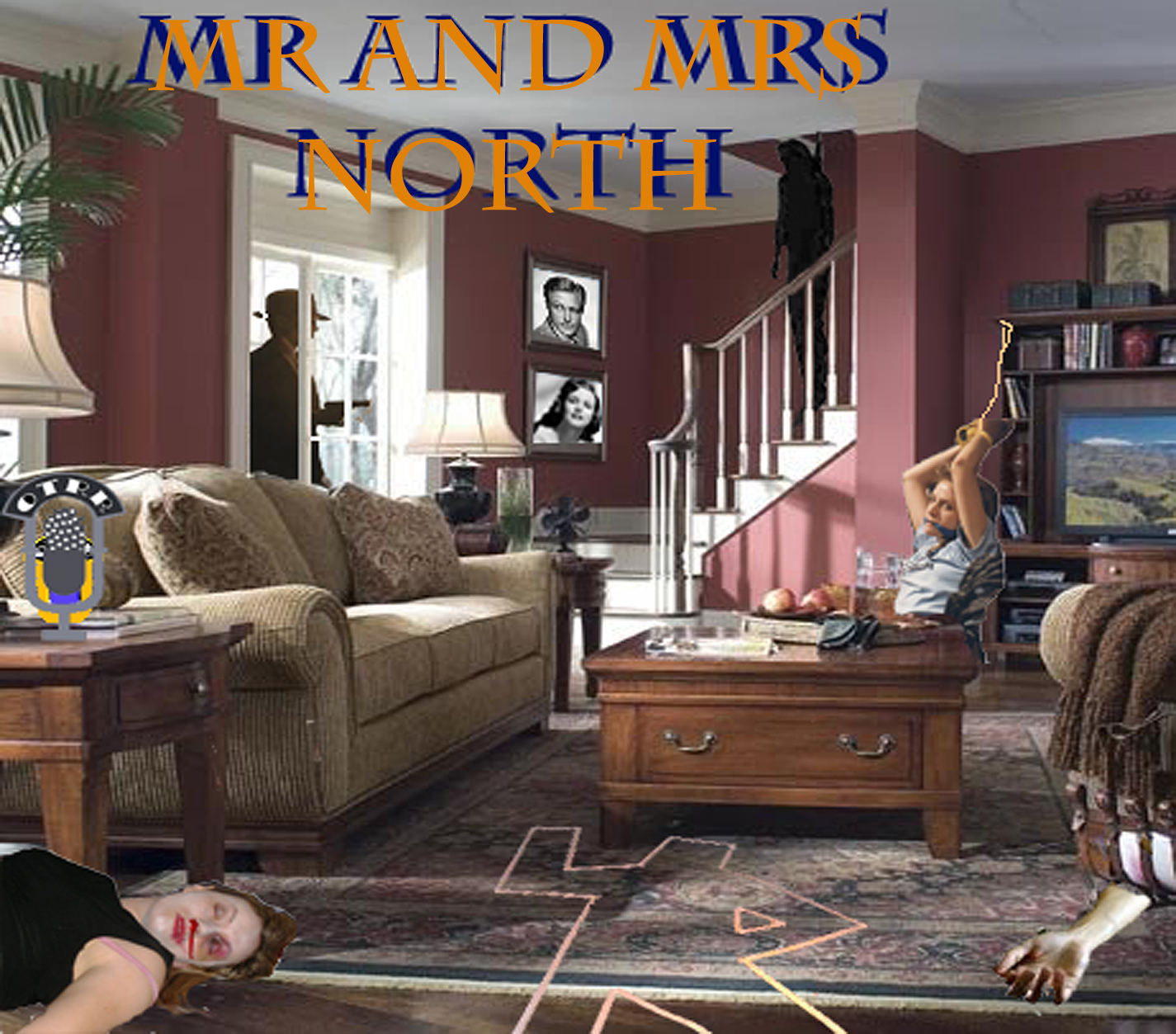 Mr. and Mrs. North are fictional American amateur detectives. Created by Frances and Richard Lockridge, the couple were featured in a series of 26 Mr. and Mrs. North novels, a Broadway play, a motion picture and several radio and television series.

Mr. and Mrs. North was a radio mystery series that aired on CBS from 1942 to 1954. Alice Frost and Joseph Curtin had the title roles when the series began in 1942. The characters, publisher Jerry North and his wife Pam, lived in Greenwich Village at 24 St. Anne's Flat. They were not professional detectives but simply an ordinary couple who stumbled across a murder or two every week for 12 years. The radio program eventually reached nearly 20 million listeners.

The characters originated in 1930s vignettes written by Richard Lockridge for the New York Sun, and he brought them back for short stories in The New Yorker. These stories were collected in Mr. and Mrs. North (1936). Lockridge increased the readership after he teamed with his wife Frances on a novel, The Norths Meet Murder (1940), launching a series of 26 novels, including Death Takes a Bow, Death on the Aisle and The Dishonest Murderer. Their long-run series continued for over two decades and came to an end in 1963 with the death of Frances Lockridge. The series was unusual in that it was Mrs. North who often solved the cases, while Mr. North was just background much of the time. In his article, "Married Sleuths," Charles L.P. Silet captured the flavor of the novels:

The Mr. and Mrs. North novels contain carefully crafted puzzles and the Lockridges usually play fair with their readers. The series also features Pam and Jerry's warmly humorous domestic environment and the couple's witty exchanges with the duller members of the police force. Although the Norths remain the focus of the series, the books contain a good deal of political and social commentary, a richly detailed look at the changing life in New York City, as well as glimpses of the outlying suburban counties. Also, the North's stable marriage relationship presents a marked contrast--and a welcome one--to the traditions of the lone detective characteristic of much other American mystery fiction. Even though the Mr. and Mrs. North novels now may appear overly deliberate in their pacing, they still prove wonderful reading as mysteries, and the glimpses they provide of our past social history give them a nostalgic and authentic period flavor. Aficionados of classic crime fiction have always appreciated this longrunning series, and new readers should be encouraged to discover this witty and charming couple.

Albert Hackett and Peggy Conklin had the title roles in the Broadway production Mr. and Mrs. North, which ran 163 performances at the Belasco Theatre from January 12, 1941, to May 31, 1941. Alfred De Liagre, Jr. produced and directed the play written by Owen Davis. In that version, the North's apartment is located on Greenwich Place, realized in a scenic design by Jo Mielziner.

The Owen Davis play became a 1942 MGM movie starring Gracie Allen and William Post, Jr. with Millard Mitchell repeating his role of Detective Mullins from the Broadway production. Others in the cast were Paul Kelly, Rose Hobart and Keye Luke.

... who passed themselves off as a publisher and his homemaker-spouse continued to make lighthearted wisecracks as they stepped over bodies in dark alleys and were rendered unconscious by unknown assailants dispensing blows to the head almost every week... The feminine half of the twosome was at least equal to the husband in solving cases that often baffled law-enforcement officers with years of training and practice—except in reading clues. No explanation was given, of course, as to why a couple of misfits could be so successful in their preoccupation while the professionals thrashed about ineffectually."

Sixteen episodes of the TV series have been released in the "Best of TV Detectives" box set.

Mr. and Mrs. North were resurrected in spirit with ABC's Hart to Hart, the 1979-84 crime drama about a wealthy husband (Robert Wagner) and wife (Stefanie Powers) who spent as much time solving murders and romancing each other as pursuing careers as an industrialist and a journalist, played the crime theme with wry wit reminiscent of the Norths in their heyday.


From the Old Time Radio Researchers Group.  See "Note" Section below for more information on the OTRR.

Reviewer: LizaNicole - favoritefavoritefavoritefavoritefavorite - August 17, 2019
Subject: Thank you for uploading!
I appreciate it so much!
Reviewer: dueepjs - - February 14, 2018
Subject: This could have had such possibilities, but...
All right, let me admit it. Having been brought up on Nick and Nora Charles, I thought Mr. and Mrs. North would be equally charming. Believe it or not, I did not manage to get through even the first episode. Because in the first 15 minutes, this very tiresome woman has got her husband into a picnic, given away his favourite brown suit, to the butcher, invited someone she does not know to the picnic, thinking it to be a brunch and her explanations for all these idiotic actions are absolutely and patently absurd. At that time, it may have been considered funny. In today's world, she would be considered a pain in the neck and he would have divorced her, for mental cruelty, within a week of marriage. In fact, he asks her in a very exasperated tone, three quarters into the program to tell him why he married her.
Funnily enough, this tendency of wives to give away the favourite belongings of their husbands even today, is very much prevalent in America.I have not seen it anywhere else in the world. Is there any particular psychological reason, why a woman feels threatened by her husband's affection towards an old piece of clothing or memory souvenir, he has kept and treasured down the years? Sorry, Mrs. North is just not plainly or even charmingly dimwitted, she is hundred percent "wanting."
Reviewer: AMC Hornet - - September 28, 2013
Subject: Single episodes coming soon?
Please?

Uploaded by OTRRArchive on September 21, 2013